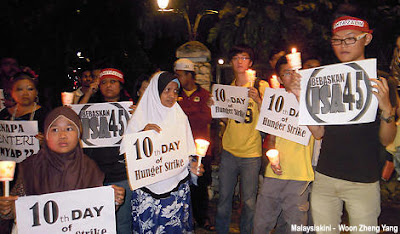 The government should shut down the detention camp in Kamunting and convert it into a national heritage site, urged anti-ISA group Gabungan Mansuhkan ISA (GMI), in announcing three demands last night.

GMI secretariat member Ahmad Syukri Razab also called on the police to immediately release the last 45 detainees held there under the Internal Security Act (ISA), as the law replacing it has come into force.

He also demanded that the government to set up an independent commission to investigate the purported torture of the detainees.

Ahmad was speaking at the group’s candlelight vigil near the national police headquarters at Bukit Aman.

“(Kamunting camp) is a monument for us to remember that we have been oppressed before,” he said, explaining why he felt the infamous detention centre should be gazetted as a historical landmark.

Syukri announced these demands before a crowd of 30 people at the vigil, who displayed placards that read among others ‘10th day of hunger strike’, ‘Hunger strike for dignity’, Why torture the detainees?’

Under the close watch of some 30 police personnel, the group chanted anti-ISA slogans, recited poems and invited the family members of ISA detainees to relate their experiences.
GMI chairman Syed Ibrahim Syed Nor urged Home Minister Hishammuddin Hussein to release the last 45 detainees as he has the power to do so.

He pointed out that under Section 32(2) of the Security Offences (special measures) Bill 2012, the ISA detainees could be further detained until the detention period is served, unless the home minister intervenes.

“The minister can order the release of the detainees if he is satisfied. We urge Hishammuddin to exercise his power because it is the right thing to do,” he said.

Meanwhile, Hadijah Veerabu, whose son Fadzullah Abdul Razak has been held in Kamunting since 2010, said she missed her son very much adding has been losing weight since the day her son was taken away.

“Now he is in the tenth day of the hunger strike and my body hurts for him,” she said.

Hadijah added she had lost faith in Prime Minister Najib Abdul Razak, who promised to abolish the ISA but did not bring Fadzullah back to her.

“Whenever I ask camp officials when my son can be released, they tell me to ask Najib,” she said.

GMI said they will continue to pressure the authorities, while the activists and the family members of the detainees are expected to visit Kamunting today.
Posted by speakforperak at 10:30 PTG