Lim Kit Siang : May 7 Perak Assembly Meeting - Call it off! 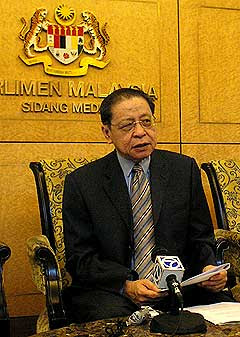 The usurper Perak Mentri Besar Datuk Seri Dr. Zambry Abd Kadir should call off the May 7 Perak State Assembly meeting as it is improperly convened against the Prime Minister, Datuk Seri Najib Razak’s public stand that the Perak State Assembly cannot meet until the court has ruled that the Barisan Nasional is the legal government in Perak.This was the position of Najib, who was then the Deputy Prime Minister, Perak UMNO Chairman and who personally orchestrated the undemocratic, unethical, illegal and unconstitutional power grab in Perak.

This is the Sunday Star report of March 1, 2009, headlined “Perak assembly cannot meet until court decides, says DPM” on Najib’s response to the convening of a State Assembly meeting by the Perak Speaker, V. Sivakumar which eventually became the historic “Tree Perak State Assembly”:

KUANTAN: The Perak State Assembly Speaker cannot call an emergency sitting of the
assembly as the court has yet to decide on the status of the government, said Deputy Prime
Minister Datuk Seri Najib Tun Razak. “By right, the sitting should not be called as we are still awaiting the decision of the court. “We want to establish the fact that Barisan is the legal government to rule the state in accordance with the constitution,” he said after opening the national higher learning carnival at Universiti Malaysia Pahang (UMP) here yesterday.
On Friday, Speaker V. Sivakumar said the assembly would convene the sitting on Tuesday to
vote on two motions, including one seeking to dissolve the State Assembly.

Asked if the move was aimed at toppling the Barisan Nasional government, Najib said the
court’s decision would put the matter to rest. As up to now the Court has not made any decision that the Barisan Nasional is the legal government in Perak state, the May 7 State Assembly should not be convened and should be called off until there is such a judicial decision.
In the circumstances, any public posturings by Zambry that the Barisan Nasional will not participate in the“fight for chairs” to claim the seats of the Mentri Besar and the State exco members in the State Assembly is not only premature but presumptuous.

Does Zambry think he belongs to a special category of persons who is privileged to short-circuit the whole process of the administration of justice so as to move the Federal Court, the highest court of the land, to rush to judgment in his favour with inadequate notice to all the relevant parties concerned?Malaysians will be very shocked if Zambry succeeds in getting such a declaration from the Federal Court on Tuesday with such short notice.
Posted by speakforperak at 8:52 PTG