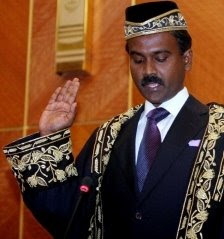 While Barisan Nasional leaders are coy about any motion to boot out the speaker at the May 7 state assembly meeting, Nga Kor Ming is already defending the speaker's right to reject motions brought before the house.

Nga said that if the speaker in Malacca could summarily reject a motion, so could Perak Speaker V. Sivakumar.

Nga said he was informed by sources within the state administration that BN would table an emergency motion to dismiss the speaker. "This is the first time that such a thing would happen in our country. I am sad and shocked,” he said. At the Malacca state assembly sitting on April 21, Othman only allowed Kesidang assemblyman Goh Leong San to read the title of the emergency motion, before he rejected it, saying that it was neither urgent nor involved public interest.
Posted by speakforperak at 9:05 PTG