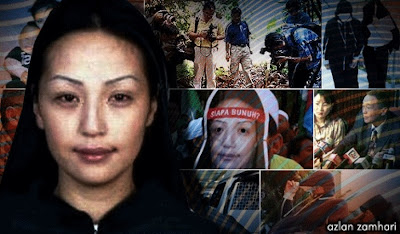 The shocking outcome of the Altantuya murder appeal in the Court of Appeal has the effect of bringing further and total disrepute to the Malaysian criminal justice system.
Keadilan has consistently maintained that the Altantuya High Court trial of Razak Baginda, Chief Inspector Azilah Hadri and Corporal Sirul Azhar Umar had always been a manipulated process and done according to a prescribed script.

When the script was not followed at certain points in the initial stages, we saw the fallout. The most senior prosecutors in the Prosecution Division of the AG’s Chambers such as Dato Sallehudin and Dato Yusuf Zainal Abiden  were removed from the team when apparently they refused to play ball with a script that would result in the certain acquittal of Razak Baginda.  Sallehudin then resigned to go into private practice.

We also saw the trial moved to be heard before YA Zaki Yassin after YA N Segara refused bail to Razak on the basis of facts stated in Razak’s own affidavit. The movement was of course disguised in a reshuffle of cases in the Shah Alam High Court.
There were still occasional out of script moments during the trial when a witness Burma Oyunchimeg @ Amy tried to tell the Court about the photograph shown to her by Altantuya showing Razak, Najib and her in a restaurant in Paris and was stopped by objections from the defence, prosecution and the court.

The rest of the trial mostly played out according to the written script including the acquittal of Razak Baginda.
Keadilan had consistently maintained earlier that key witnesses such as DSP Musa Safiri, Nasir Safar, Prime Minister Najib, his wife Rosmah and his brother Nazim Razak should all have been called as relevant witnesses – not so much to establish the guilt of Sirul and Azilah but to establish who had directed Sirul and Azilah to kill Altantuya.  After the revelations of Deepak Tethwani and Americk Singh Sidhu,  it was obvious that they and Cecil Abraham were also relevant witnesses.
Private investigator Balasubramaniam had in his public statements detailed Musa’s involvement in the episode and the link between Musa and Razak Baginda.  The key question to be answered was always  -who was directing Musa as Razak clearly had no authority to direct key police personnel.  Musa at that time was Najib’s ADC.

Nasir Safar, Prime Minister Najib’s private secretary of 20 years standing at the material time ( no longer now )  was identified by Balasubramaniam as present on the night of the murder on 19th October 2006 in front of Razak Baginda’s house in Bukit Damansara driving around slowly surveying the scene before Sirul, Azilah and woman policeman L/Corp Rohaniza Roslan arrived later to take away Altantuya who was in front of the house with Bala.

Najib, Rosmah and Nazim have all been implicated by public statements by Balasubramaniam, Deepak and Americk Singh Sidhu in the making of Bala’s 2nd SD which was done to obliterate all references to the alleged relationship between Najib and Altantuya in Bala’s 1st SD.
When the High Court judge YA Zaki said he had a problem establishing motive, it would be obvious to all and sundry that witnesses such as Musa, Nasir Safar, Najib, Rosmah, Nazim, Deepak, Cecil Abraham amongst others would be highly relevant to motive. But of course none were called to give evidence during the trial.

The acquittal of Razak Baginda without his defence being called was highly questionable. Also questionable was the decision of the AG to not appeal. The AG’s Chambers routinely appeals verdicts against them in criminal trials; they had also made repeated and consistent public statements that they had a good case against Razak – why then did they not appeal?
It is our view that there was sufficient evidence during the trial to convict Azilah and Sirul on the evidence of Bala, Lance Corporal Rohaniza, the phone records showing constant communication between Azilah and Razak from 18 October before and after the murder, the fact that Altantuya’s jewellery was found in Sirul’s house, CCTV footage in Hotel Malaya ( where Altantuya was staying ) on 18 October showing Sirul and Azilah’s presence there,

Altantuya’s blood stains on slippers in Sirul’s car, the use of C4 explosives and other evidence presented. There could be no doubt that Sirul and Azilah were the last to be seen with Altantuya.
It is our view that even if the Court of Appeal found defects in the manner the High Court judge analyzed the evidence and in the conduct of the prosecution in presenting the case, the proper order to make in this case was to order a retrial and NOT grant an acquittal, particularly when the defect was that a key witnesses such as Musa Safiri was not called. There is ample power under the law in section 60 of the Courts of Judicature Act 1964 to order a retrial which is regularly done in appeals.
However the judgment of the Court of Appeal again highlights aspects of the shoddy prosecution highlighting in particular the omission to call Musa Safiri. However the omission is not just to call Musa but also the many others stated above, Musa, Nasir Safar, Najib, Rosmah, Nazim, Deepak, Cecil Abraham amongst others.

The question raised by the Court of Appeal about the failure of the prosecution to call a key witness Musa Safiri is only one of many questions to be asked about this failed prosecution. Any independent investigator would be asking why persons linked closely to Najib such as Musa Safiri and Nasir Safar are linked to the

murder?  Najib’s direct involvement in the making of Bala’s 2nd SD raises questions about his motives here.
We therefore call for a Royal Commission of Inquiry into the failed prosecution. We had already earlier called it a failed prosecution because of the acquittal of Razak Baginda and the gross failure to identify and prosecute those who directed the killing of Altantuya.

However the failed prosecution has taken a ludicrous twist with the acquittal of Sirul and Azilah as now the Malaysian criminal justice system sinks into complete disrepute in the eyes of the world. A Royal Commission is necessary to start the process of rescuing its credibility. Will the Cabinet sit ( without the presence of Prime Minister Najib ) and make a decision?
Sivarasa Rasiah, Member of Parliament for Subang
24th August 2013