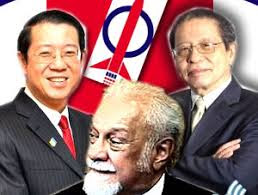 The DAP National Legal Bureau headed by DAP MP for Puchong Gobind Singh Deo should comb through the over 200 Utusan Malaysia reports and articles targetting and character-assassinating DAP since January to file multiple defamation suits against the Umno newspaper.

In these reports and articles, Utusan Malaysia have ad nauseum repeated lies and falsehoods against the DAP and DAP leaders, particularly over the DAP Central Executive Committee (CEC) elections at the DAP National Congress in Penang last December, in utter disregard of the basic canons of journalism with regard to ethics, honesty and truth.

This campaign directed by the Umno/BN "war room" to demonise and destroy the DAP reached its peak in April just before the 13th General Elections, and although its tempo slowed down immediately after the general elections in May, its momentum was accelerated in June and July, culminating in the directive by the Registrar of Societies to the DAP on CEC re-elections.

Although the Registrar of Societies did not give any reasons to the DAP for its directive on CEC re-elections, two false allegations had been prominently canvassed in the Utusan media offensive in the past six months to justify any RoS invalidation of the CEC elections last December:

1. That 753 DAP delegates had not been notified of the DAP Congress and denied the right to vote for the new CEC.

2. That there were 547 phantom delegates, primarily from Penang, who voted at the DAP Congress last December.

It would be understandable if the RoS had directed re-election of the CEC if anyone of these two allegations ha.d been true,but both these allegations are downright lies.

The RoS Director-General Datuk Abdul Rahman Othman had publicly said early this year that he could only order for CEC re-elections if there was "concrete evidence" of discrepancies in the election process.

With the two wild and baseless "753" and "547"  allegations proven to be downright lies, what other "concrete evidence" is there for the Registrar of Societies to justify his directive for CEC re-elections?