The murder robbery of Norazita Abu Talib shocked the nation. She was brutally shot in the face by a security guard who was said to possess a fake identity card.  The senseless death of the Ambank officer late last month has opened yet another can of worms pertaining to our worsening crime situation. 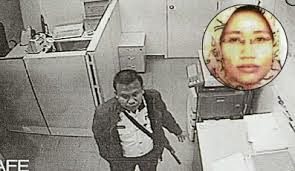 Why did Norazita have to die like that? Let me be blunt here; yes, we can blame UMNO leadership - for refusing to reform the police and for allowing cronies to run security firms.
There’s no need to cringe or get upset. Please bear with me. The facts are all there.

Criminals everywhere, yet they are looking for Communists

While the crime rate is high and the situation is said to be worsening – murder, rape and other violent crimes - the UMNO-led Barisan Nasional government is still obsessed with the Communists!

Our police are still operating in the Cold War mode as if the Communists are still lurking around the corner, notwithstanding the fact that Chin Peng is long gone and that the Haatyai Peace Treaty between the Malaysian Government and the Communist Party of Malaya was signed in December 1989. That was 24 years ago.

As I said before, the crime rate is high. Never mind the police and the government statistics that suggest otherwise.  Fear of crime drives demand for private security protection. In Kuala Lumpur, we can see the mushrooming boom-gates and guardhouses in middle class housing estates in recent years.

Hence, I’m dumbfounded to read Home Minister Datuk Seri Ahmad Zahid Hamidi’s Parliamentary reply to Er Teck Hwa, MP for Bakri, that the crime rate has fallen by half between 2008 and 2013. Is he actually referring to Malaysia?

While there are enough police personnel per capita (approximately 110,000 police to 28 million people), only a fraction is involved in direct crime fighting. Omnipresence of the police and quality investigation are two most important factors, yet half of the police personnel are in management, logistics (12 percent), special branch (5 percent), riot police (3 percent), and the communist-fighting paramilitary unit General Operation Force (15 percent)!

As a result, police patrols are not adequate enough. Crime investigators are overstretched and overworked. Only less than 10 percent of the police force are in the crime investigation department, with only about 2,000 are ranked inspectors and above with full authority to investigate. The heavy workload forces many to sleep on old sofas in ill-equipped police stations. My sympathy is with them.

The things you learn from CSI – whether in the TV series or in real life in some other developed and recently-developed countries - won’t apply here for obvious reasons. Science and intelligence-based investigations are a rarity in Malaysia. Confession-based investigation is still the order of the day.

Former Prime Minster Tun Abdullah Badawi announced the formation of a royal commission headed by former Chief Justice TunDzaiddin in December 2003 and a comprehensive 600-page report was submitted in May 2005. I guess the thick book is gathering dust right now.

With high crime incidences and the refusal of the BN government to shift police priority from fighting communists to crime busting, it’s no surprise that there is a huge ready market for private security protection.

In October 2011, the Home Ministry informed me in a Parliamentary reply that there were 584 security firms registered with the government. Two years later, the number jumped to 751. 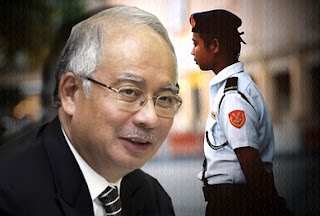 The 2011 parliamentary reply claimed that there were 160,000 Malaysian security guards and another 1,049 Nepali former soldiers.

It seems that it’s not that difficult to set up a private security service firm in Malaysia.
Private security firms - why we can blame UMNO leadership

The root of the problem lies in UMNO-led privatisation - three phases of Build-Operate-Transfer of infrastructures – which was the main model in the 1980s, exemplified by the North South Highway. In the 1990s, utilities were privatised in a big way such as to independent power producers. Post-2000, UMNO was increasingly relying on its licensing power to placate an ever expanding lobby for contracts, permits, licenses and favours.

There can only be a certain amount of construction contracts to be dished out. But licenses and permits are more elastic. For instance, millions of foreign workers were and are still being brought into the labour force, resulting in a race to the bottom of wages for low end workers, many of whom are Malays.

In the private security sector, licenses used to be given only to very senior retired police chiefs or generals. But in recent years, UMNO politicians and their proxies received most of the new licenses.

For quick money, the UMNO-linked licensees are prepared to do anything. And there is practically no scrutiny. So, thanks to them, we become a nation of mercenaries in the form of foreign guards.
Posted by speakforperak at 6:31 PTG