Will Karpal be fourth-time lucky? 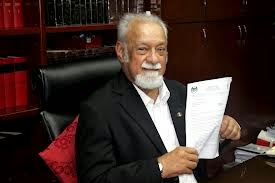 Veteran opposition lawmaker Karpal Singh's political career hangs in the balance as he faces his first criminal conviction this week after beating three previous charges in more than 40 years of politics.

The High Court in Kuala Lumpur will rule on Friday whether the Bukit Gelugor MP is guilty of sedition, an offence which carries a maximum RM5,000 fine or three years' jail, or both if convicted, in a case involving the Perak sultan.
Under the Federal Constitution, an elected representative is disqualified from office if fined more than RM2,000 or jailed for a term exceeding one year.
"I am aware that a conviction will bring an end to my political career but I have done what was expected of me.
"I have no regrets," the 73-year-old lawyer told The Malaysian Insider.
He said there was nothing to worry about as the conviction "did not a carry a death sentence".
Karpal is charged with uttering seditious words against Sultan of Perak Sultan Azlan Shah at his legal firm in Jalan Pudu Lama in Kuala Lumpur on February 6, 2009.
He was alleged to have said that the removal of Datuk Seri Mohammad Nizar Jamaluddin as menteri besar of Perak by the ruler could be questioned in a court of law.
Karpal's defence is that he offered a legal opinion and not a threat to the ruler, who was once the lord president of the then Supreme Court.
"Obviously, this is a serious charge but we have put forward the best defence to secure an acquittal," said the lawyer who conducted his case with the assistance of his four children.
In the submission at the close of the defence's case last month, his son Gobind had submitted that Karpal did not question the ruler's prerogative to appoint a menteri besar, but his contention was that such power could only be exercised when there was a vacancy.
"The law allows for rulers to be sued and it is for this reason that a Special Court was set up in 1993," Gobind had said.
Karpal's legal team also contended that the charge was framed with bad faith as there were others who made worse seditious remarks but no action was taken against them.
Deputy public prosecutor Noorin Badaruddin said Karpal had uttered seditious words and his intention was irrelevant for the prosecution to prove.
"He has questioned the prerogative of the sultan under the Constitution," she said, adding the statement was made in the midst of a tense political crisis then.
She said the lawyer's words had the tendency to create hatred towards the ruler.
Karpal was first acquitted without having his defence called in June 2010.
In January 2012, the Court of Appeal ordered Karpal to enter defence after the public prosecutor's appealed was allowed.
The national DAP chairman's legal team is expected to mitigate for a lighter penalty.
Trial judge Azman Abdullah could impose a fine of less than RM2,000 if the wheelchair-bound Karpal is found guilty and, thereby, enable him to remain an MP.
This had happened to former Sabah chief minister Datuk Seri Joseph Pairin Kitingan, who was fined RM1,800 after he was found guilty of corruption.
Karpal has two more rounds of appeal in the Court of Appeal and the Federal Court if he is convicted and the punishment is severe to the extent of losing his public office.
But many among the public and supporters hope that Karpal, dubbed the “Tiger of Jelutong”, will be fourth-time lucky.
Karpal had been charged three times in the past but none succeeded in ousting him from office.
The only time he was out of Parliament was when he lost in the 1999 general election or suspended from the assembly.
On the first occasion, he was charged with taking part in an unlawful procession, refusing to disperse on police order and assaulting a police officer in the course of the public servant carrying out his duty.
That happened in Alor Star in 1984.
Karpal was acquitted of the first two charges but was fined RM250 for assaulting the police officer. The public prosecutor appealed against the sentence but the High Court dismissed it.
He was also charged with participating in an illegal assembly together with his comrade, the late P. Patto in Kampar, Perak, in 1990.
Again, both men were acquitted by a magistrate and the public prosecutor's appeal was also dismissed.
Karpal, who represented former deputy prime minister Datuk Seri Anwar Ibrahim during the latter's sodomy trial of 1998, was also charged with sedition.
He had  produced a pathology report confirming high levels of arsenic had been detected in Anwar's body, and accused the authorities of poisoning the former deputy prime minister.
Karpal had told the court then: "It could well be that someone out there wants to get rid of him... even to the extent of murder... I suspect people in high places are responsible for this situation."
This accusation in court led to Karpal being charged in 2000 but the prosecution subsequently withdrew the charge. – February 18, 2014.
Posted by speakforperak at 11:11 PTG