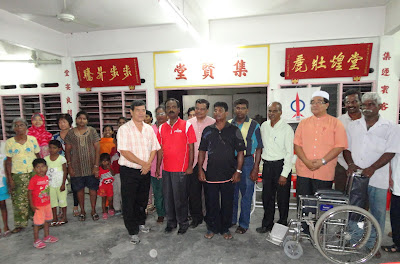 On 16th October 2011, I had attended a group talk, in Ayer Kuning, Tapah. I had visited a group of Indians in the area and there were 3 main issues been raised by the Indian community:
i. Empty Promise : 2 years ago, one MIC leader had promised to give RM20,000 to Kuil Sri Maha Mariamman, Ayer Kuning. Until to-date, the amount has not been given to the temple. The temple is now under construction and this amount will be a great help for its building’s fund. The Ayer Kuning State Assemblyman, YB Dato’ Samsudin Bin Abu Hassan knows this matter about 4 (four) months ago, yet the issue has been kept in silence by both the MIC Leader and the State Assemblyman. Why the RM20 000 is not yet given to the temple as promised?

ii. Tamil School : There are quite a big number of Indian families residing in Ayer Kuning and its surrounding area. Even a small Tamil school will help the residents here. They don’t have to send their children far. As there is no Tamil School here, parents find it difficult to send their children to a Tamil school. Why there is no proposal by the MIC leadership to build a Tamil school in this area for the Indian community’s children education? If there is a proposal being done, what is the status of the proposal now?
iii. Exam during Deepavali : SM Ayer Kuning is having its final year examination on the next day of Deepavali festival; i.e. 27th October 2011. This is totally unfair to the Indian students of the school to sit for their exam during the festival season. Indian parents are not satisfied at all by this situation. This has also put on extra stress to the Indian children to study even on the Deepavali day. It is will not bring a joyful celebration to the parents as they will also be seeing their children studying on a festival day. This situation has brought the momentum of celebration been put off for the families celebrating Deepavali.
I am writing to the School Principal requesting to replace the exam on a later date. This letter will also be sent a copy to the Education Minister.

Posted by speakforperak at 5:38 PTG