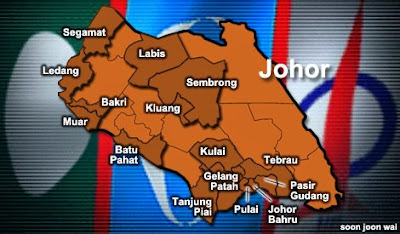 Johore is a key battleground for the vision of a Malaysian Dream as a unifying factor for all Malaysians, regardless of race, religion or region and antidote to the revival of extremist and intolerant racist politics in the five months after the 13th general elections on May 5, 2013.

In fact, the Vision of a Malaysian Dream was given expression in the Battle of Gelang Patah in the 13th General Elections, as a direct response to irresponsible and reckless campaign by UMNO politicians, led by former Prime Minister Tun Mahathir, to racialise the Gelang Patah contest in particular and the 13th general election in general.

But Gelang Patah was a major failure for Mahathir, particularly his irresponsible and reckless campaign to racialise the Gelang Patah battle between former Mentri Besar Datuk Ghani Othman and myself by falsely and mischievously alleging that I had wanted to create a “racial confrontation” and that I was seeking to incite the Chinese to hate the Malays.

In fact, far from trying to racialise the electoral battle, it was in pursuit of the Malaysian Dream as a rallying point of unity for all races in the country  that was behind my high-risk decision to leave the Ipoh Timor parliamentary seat, where I had won with a majority of over 21,000 votes in the 2008 GE, to contest in the Barisan Nasional fortress of Gelang Patah which BN had won with some 9,000-vote majority in the 2008 GE and a humoungous 31,688-vote majority in the 2004 GE.

There was no surety that I could win in Gelang Patah. In fact, there was a lot of concern that I would lose as I had seemed to have bitten more than I could chew, especially with top UMNO campaigners like Tun Mahathir and Deputy Prime Minister Tan Sri Muhyiddin Yassin calling on the voters to make Gelang Patah my “graveyard”.

In the past five months, UMNO leaders led by Mahathir are back on their irresponsible and reckless campaign trail, with their preposterous allegations and lies that the 13th General Election was proof that the Chinese in Malaysia were out to oust the political power of the Malays and to dominate Malaysian politics.
This is why there is a need for  Malaysians to embrace the Vision of a Malaysian Dream as an antidote to the revival of extremist and intolerant brand of racist politics, totally antithetical to the Bangsa Malaysia concept in Vision 2020 conceived by Mahathir himself  more than two decades ago or the 1Malaysia Policy of the Prime Minister, Datuk Seri Najib Razak.

As the state which had wrought the greatest changes in the 13th General Election, ending Umno and MCA’s hitherto unchallenged stranglehold  on Johore as a “fixed deposit state” and with Pakatan Rakyat winning the most number of increased State Assembly seats – from 6 in 2008 to 18 in 2009, one seat short of denying Barisan Nasional two-thirds majority in the Johore State Assembly – Johore will be a key battleground for the Vision of Malaysian Dream.

This is most appropriate as  it was in Johore 62 years ago that the great Johore Malay leader and founding UMNO President Datuk Onn Jaffar proved he was  far ahead of his times when he made the historic call for the opening up of Umno to non-Malay members and to change Umno to mean United Malayans National Organisation.

This will be the greatest challenge for the DAP and Pakatan Rakyat leaders, MPs and State Assembly members in Johore in the next few years, how to get the people of Johore to play a leading role in the country in the fulfillment of the Malaysian Dream, viz:

Firstly, to get all voters of DAP and Pakatan Rakyat to be advocates of the Malaysian Dream to build a Malaysia for all Malaysians and not a Malay Malaysia, Chinese Malaysia, Indian Malaysia, Kadazan Malaysia or Iban Malaysia; and

As Johore DAP State Secretary, Tan Chen Choon (Assemblyman for Jementah) said to  the press yesterday, 15 DAP elected representatives in Johore (four DAP MPs and 11 State Assembly members) who met in Simpang Rengam on Saturday night have reached a consensus on building a more united, cohesive and purposive political force in Johore – that internal party problems should be resolved through  internal party channels.

With this consensus by the DAP Johore leadership, the stage is set for the great challenge of the DAP Johore as well as DAP Pakatan Rakyat – to transform Johore as the key battle ground in the country for the vision of a Malaysian Dream as an antidote to the revival of extremist and intolerant racist politics in the past five months.