Hishammuddin : Police Reacted 'Within The Law' 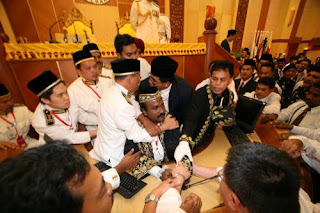 Home Minister Hishammuddin Hussein defended police interference in the Perak state assembly on May 7 as being ‘within the law'.

Hishammuddin said the authorities, including police and assembly personnel had reacted in such a manner because of a call for aid by Ganesan, who by then, had been elected speaker by the BN majority.

"The police went into the assembly because the speaker (Ganesan) had requested for their help... Sivakumar refused to vacate his seat despite being asked to do so politely," said Hishammuddin.

He added that their actions also were in line with Section 89 and Section 90 of the Standing Order.

"The assembly was in disorder, and to prevent any untoward incident, the speaker (Ganesan) ordered the cops to remove Sivakumar so that the assembly could progress smoothly," he said.

The minister had also brought up the fact that videos of the chaos in the assembly were uploaded to YouTube which gave the public the impression that the disarray was caused by BN lawmakers in the assembly.

"Several had posted certain video recordings to distort facts... but the Hansard reflects the actual events which show that the tumult was initiated by Pakatan assemblypersons," he said.

"We cannot have selective memory syndrome. If they can leave it to the courts to decide on the legitimacy of the menteri besar, why not take this issue to the courts as well?" he asked, adding that Pakatan can institute legal action against the police and the government.
Posted by speakforperak at 5:38 PTG