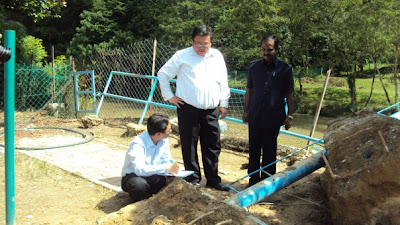 Task force member Teja assemblyman Chang Lih Kang told a press conference this afternoon that no application had ever been sent to the Kampar district council to seek approval before the bridge was built.

The bridge, he added, was worth about RM40,000 and had been constructed by a private company based in Kuala Lumpur as a contribution to the district education office.

“We have interviewed several people, including the Kampar district officer and the chief assistant district officer, but they revealed that the council was never informed of such a structure,” he said.

Chang said that before such a bridge could be built, an application would first have to be made with the council since the land was within the council’s jurisdiction.

“They will have to submit a ‘Borang A’ to the council and then, the council’s one-stop centre will send out the application to four different government agencies for further approval – the Health Department, Drainage and Irrigation Department (DID), Fire and Rescue Department (Bomba) and the Department of Environment,” he said.

Only if the structure satisfied all requirements, and all four departments gave the green light, would the council issue an approval.

“Once the structure is completed, a consultant engineer must issue a Certificate of Compliance and Completion,” he said.

In the case of the Kuala Dipang bridge, said Chang, none of the requirements had been met.

“In fact, we are not even sure if the company had employed any consultant engineer at all in the first place.

“Furthermore, according to DID guidelines, a construction like the bridge needs to have special measurements taken for the prevention of soil erosion.

“From our observation after we visited the site on Tuesday, no such measurements were taken. There were no retaining walls to hold up the structure and its base was built too close to the river,” said Chang.

Meanwhile, the task force’s chairman, Tronoh assemblyman V. Sivakumar said that, based on interviews with some of the children who witnessed the tragedy on Oct 27, there had been no teacher-supervisors watching over the children at the time of the incident.

“From what we were told, not more than five teachers were tasked to look out for the children during the time of the incident. The remaining group of teachers were apparently having a briefing session in the school building,” he said.

Apparently, during the time the group of schoolchildren were crossing the bridge, not a single teacher was keeping watch over them, he added.

“Before that, the students were told that they were only allowed to cross the bridge six at a time and before the incident, the teachers were careful to make sure of that.

“But later that night, no one supervised. That was why there were actually 22 students crossing the bridge at the same time,” said Sivakumar.

He added that as children, the group would naturally get playful and begin playing around with the handrails and jumping on the frail structure.

“That was when the bridge collapsed. And from what we were told, only three teachers had helped to rescue the children – two men and one woman. The others were busy in the meeting,” he said.

The incident, which occurred about 10.30pm that night, caused the deaths of N. Dina Deve and M. Devatharshini, both 11, and 12-year-old V. Divyashree.

The three had been participants in the Education Ministry’s 1 Malaysia unity camp which involved a total of 298 students from 60 schools in the Kinta Selatan district.

Furthermore, Sivakumar said that despite the large number of participants, only 30 teachers were employed to look after the children.

“Meaning, one teacher has to look after 10 children. To make matters worse, during that night, most of them chose to go for a briefing.

“Why do they need to have a briefing at the time when they should be taking care of the children?” he said.

Sivakumar added that the parents of the three deceased had also not been aware of where the camp would be taking their children and that there would be physical activities involved.

“As for the two 11-year-olds, they were not even supposed to be a part of the camp because it was actually meant for Standard 6 students.

“They were only told that there were not enough students on the very day itself,” he said.

He added that before their children were allowed to go for the camp, the parents of the students were made to sign disclaimer forms which absolved the authorities of all responsibility should any incident happen.

“But how can this be fair when the location of the camp itself was not safe and the parents are not even made aware of this?” said Sivakumar.

The PR ad hoc task force will set out to interview the district education department and the DID next as well as get a consultant engineer to study the structural defects of the bridge at the site.

They are also pushing for a public inquiry to be held on the incident.

The Education Ministry is also probing the incident and their investigations are estimated to be completed by the end of next week.

Posted by speakforperak at 5:02 PTG