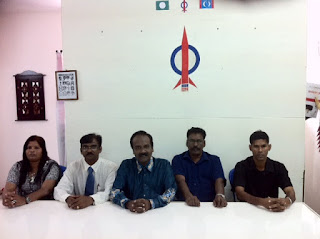 1.  Due to economic reasons and limited job opportunities, the Indians have left the estate and moved to urban areas. This had reasoned the under-enrollment of students in Tamil schools is unavoidable.

2. So, how will the community and MIC going to safeguard the Tamil Schools?

3. For the past 3 years, Dato’ Veerasingam had been saying that the MIC had identified lands here and there but there is no constructive work has been materialized.

4. In many meetings, Dato’ Veerasingam said they have identified new sites for these Tamil schools :
a) Gunung Rapat
b) Jelapang
c) Langkap
d) Sungai Siput
e) Changkat Salak
- but there has been nothing concrete taken place as at-to-date.
Has MIC secured the so-called identified lands and has it been gazette for the schools. Hope it is not simply an empty promise for the coming general elections?
Can Dato’ Veerasingam ask the state EXCO to pass an order to gazette those lands which they said had identified? It has to be done immediately before the general elections.
Can MIC Perak come out with a blue-print for the Tamil schools in Perak?
Posted by speakforperak at 1:08 PTG